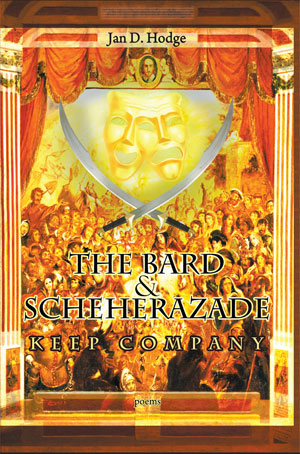 The Bard and Scheherazade Keep Company

In The Bard and Scheherazade Keep Company, Jan D. Hodge shows impressive formal dexterity, and inventive use of the double dactyl. He turns the difficult form on its head as it transforms into a narrative vehicle, retelling the great classics—the plays of Shakespeare, the One Thousand and One Nights stories from the Islamic Golden Age (as recounted by the legendary Scheherazade to the sultan Shahrayar), and the series of medieval European folktales about the trickster, Reynard the Fox. Hodge’s versification of these classic masterpieces manages to liberate this restrictive form and yet sustain its strict rules. This delightfully witty, quirky, playful collection reads naturally, while remaining lexicographically bounteous.

PRAISE FOR THE BARD AND SCHEHERAZADE KEEP COMPANY:

Jan D. Hodge has given us an astonishing book—as remarkable a tour de force as ever I’ve seen.  I wouldn’t have thought that witty verse form, the double dactyl, could be used to tell a story, but modifying the pattern only slightly, Hodge retells some celebrated stories in enjoyable style—Shakespeare plays, six tales from the Arabian Nights, and the popular medieval legend of Reynard the Fox.  You don’t have to admire poetic ingenuity to read them with pleasure, but I’m all dumb doglike admiration at Hodge’s spectacular triumph.
—X.J. Kennedy

Jan D. Hodge’s mastery of the double dactyl is nothing short of stunning.  Open this book at random, and you will find the form perfectly used, the language both natural and original, and the wit a delight.  From Romeo to Reynard, you’re going to love these poems.
—Gail White

Jan D. Hodge has renovated the most challenging of light verse forms and transformed it into a vehicle for poems that revisit classic works of literature.  Hodge’s deft handling of meter and intermittent quirky notes create a sense of intimacy between the reader and the poet that is both enjoyable and rare in today’s poetry.
—A.M. Juster

Jan D. Hodge grew up in a letterpress printing shop in small town Michigan, and received his BA and MA degrees from the University of Michigan and his PhD from the University of New Mexico, where he wrote his dissertation on Charles Dickens. He taught at Rockford (Illinois) College and at Morningside College in Sioux City, Iowa.
His poems have appeared in many print and online journals and anthologies, and his book Taking Shape, a collection of carmina figurata, was published in 2015 by Able Muse Press.